You might as well eat the whole box now, right?

Your day is ruined anyways.

August 1992. I had just moved out of my parents' house to live in my own apartment, to go to a high-school in a different city.

That was when I discovered Costco. I had no idea that you could buy full cases of chocolate bars.

Sweet! I had a couple chocolate bars EVERY DAY during my college years.

Ten years later: I was part-owner in a printing business. We had over fifty employees. So, more than once a week, I would stop on my way to work and buy a few dozens of  doughnuts “for the staff.”

I would eat one or two donuts on my way to work... for breakfast.

Alright, sometimes three depending on traffic.

Well, no judging, have you ever had a donut for breakfast?

I know how embarrassing, because I would get to work and there were 3 donuts missing from one of the box. So people would look at me with judgment in their eyes. (Looking back they were right, I guess).

So I had to change my strategy:

I would order three single donuts

So that when I would get to work, nobody would notice that I had been diving in.

And people would ask: "You’re not having any Nath?" and I would answer: "Oh no, I’m good…"

How bad was that?

So much shame surrounding donuts.

They made me feel so bad!

They contributed to creating this voice inside my head telling me that I was such a loser with no will power, that I was constantly gaining weight and that I was weak!

It made me realize I needed to do something about it!

So, I stopped buying the single ones and taped the boxes on my way to work so that it would keep me from digging in…

IT DID NOT WORK!

I believed that Donuts had superpowers, you know? They can talk to you. They can control your hands. First thing you know, there is one bite left of a donut in your hand and you just gave in!

So I tried another strategy:

I put them in the trunk of my car, you would think it would work right? Pff.

THIS DID NOT WORK EITHER!

I had to stop on the side of the highway once, on a snowday!

The voice in my head kept telling me that even when I would be good for a while, I would always revert back to being bad.

And If I was to lose weight,

I would always gain it back.

I was convincing myself  that donuts were my downfall.

telling me that I wasn’t good enough.

It was THAT VOICE that was making sure that

I would not be able to resist them.

It was MY own doing.

Why am I talking about donuts?

It’s just a donut right? A donut is so innocent. But is it, really? It is just a small thing right?

You probably know the damage of eating them every day could have on someone’s health.

So what is YOUR DONUT?

What do you think is YOUR Downfall?

What have you convinced yourself that you cannot resist?

Have you ever heard yourself say any of these?

"I always gain weight during the holidays."

"Chips are my downfall"

"When you go back to eating normal,

you always gain the weight back"

And then I realized that these thoughts needed to change!

So I spent the last decade studying neurosciences to figure out how to reprogram my negative self-talk and transform my inner-language.

I created a system that connects the six layers of the brain that need to be addressed in order to really change the way to talk to ourselves.

The D.N.A. System taps into the exponential power of the brain.

The reason why I was constantly eating donuts and junk food was because I was living at a logical level, trying to do everything right, while I was working hard, going from one diet to the other, following my belief that I was not good enough and that I was destined to always gain the weight back.

I learned how to use the power of my unconscious mind  in order to create the life I wanted and truly change my eating habits. So instead of only counting on my logical mind, quite restricted, I am now able to access the most powerful part of her brain.

The System I used myself, and with all my clients afterward, is the base that I used to create some simple and practical applications for a healthy and vibrant life!

All these years, yo-yo dieting and exercising  proved me wrong.

We must also work on our MINDSET!

Just eating well and exercising every day is NOT ENOUGH

There are many other courses out there.
The reason why this one is different, is because it combines my

After becoming the Fitness Instructor of the year for Canada in 2007, a the top of my game, at the top of my fitness, I was still struggling with food weaknesses.

I started to apply specific strategies that totally changed the way I think about food. Now, after almost 10 years of practice as a Master Life Coach and Master NLP Practitioner, and after reaching International status with my 8 International No.1 Bestsellers, I realized that if I were to record a course to teach other people how I was able to change, it would have an even more exponential reach and it would be accessible to more clients to benefit from.

That is when I create the Online Course

You just ate a cookie. Oops... Well, nothing to do but eat the whole box now, right? Anyway, you've ruined your day! Has that ever happened to you before?  The tips and videos in the THINK Yourself® HEALTHY online course will help you program the different layers of your brain in a specific way. Instead of making up limiting stories and indulging in self-sabotage, you'll feel motivated to do what it takes to achieve transformative results and live a dynamic life. 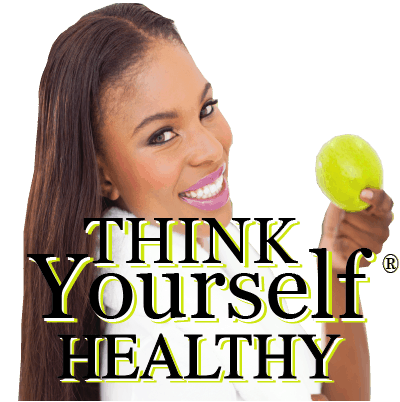 We all know what to do.

We all KNOW what to eat.

But, KNOWING & NOT DOING IS LIKE NOT KNOWING AT ALL!

I like to use the analogy of a dentist. Even people that brush their teeth on a regular basis, floss, rinse, etc. still need to go the dental hygienist once a year as they have special tools to scratch the teeth off all accumulated unwanted stuff.

It is totally normal.

We are not bad people because we need to go to the dentist.

It is just normal as there are things we just cannot remove ourselves.  It is the same for our brain.

I am like a brain dentist that helps with the clean-up of unwanted stuff that is not serving (negative self-talk, negative emotions, self-sabotage, limiting beliefs, etc.)

Everybody needs a good clean up once in a while even if they have a perfect dental hygiene routine! We cannot fix a cavity ourselves just by brushing and flossing our teeth. This course will teach you how to brush your teeth, floss and make sure no more cavities continue to form. You will be able to create a cleaner future. It is possible that you still may need a few one-on-one sessions with me in order to get some "fillings" done.

What People Are Saying About The Course

"The course is easy to follow and very engaging. I already considered myself "healthy" and yet, I did find a lot of valuable information, providing an extra push so that I could grow even more in my journey. The keys provided are simple, straight forward and relevant in every day life. The way the course is laid out makes it very easy to apply them in my life. I would recommend this course to anyone needing a healthy boost."

"The keys that Nathalie shared in her course based on her system made so much sense and were so powerful. The tips really works. I love the way the course is structured to allow for real transformation. I feel empowered to have the tools and the system to continue to help myself and also help my clients even better now."

Get the 27 tips with the THINK Yourself® HEALTHY online course. The process is easy to follow and you will finally have the strategies to transform that voice inside your head, make a difference in your life with tools, strategies, processes and a tons of tips.

2021 Canadian Presenter of the Year Nathalie Plamondon-Thomas is a Confidence Expert. She works with people who want to get rid of their negative self-talk and unlock their full potential. She brings entrepreneurs the Clarity they need to make money living from their passion. She is international No.1 Bestselling Author of fifteen books about success, communication, wellness and empowerment. She is the Founder and CEO of the THINK Yourself® ACADEMY, offering keynotes and trainings, leading-edge online courses, laser-focus business strategy and one-on-one transformation coaching.

Along the past 30 years, she has inspired over 100,000 audience members and empowered thousands of clients internationally to get rid of their negative self-talk. She combines over 10 years of experience in human resources, 25 years of experience in sales and over 30 years in the fitness industry. In 2007, she was "Fitness Instructor of the Year" for Canada.

Sorry to be the one telling you this...

As soon as you are "going back to normal", you revert back to your old habits.

In the course, you will learn how to rephrase the limiting beliefs holding you back so that you can CREATE PERMANENT CHANGE.

The tips in the course not only give you specific behaviours and skills that will support your success,

you will always learn how to transform your LIMITING BELIEFS that were holding you back.

As mentioned earlier, this course will teach you how to address each layer of your brain that need to be connected in order to live a healthy and vibrant life.  You will learn how to create real long-lasting change for yourself. You may want to make sure this is for you before you jump in.

Here's "What You Get"

36 Online videos that you can do at your own pace.

Health Comes from Within

How Long are the Videos?

It will take you approx. 4 hours to watch the videos.

What are the "small consistent actions" you are referring to above?

I provide an implementation guide that will ensure you implement the learnings by answering questions and taking the time to reflect and actualize.

Do I need to have a Zoom Account to do the course?

No, you can watch the video online from your mobile phone, tablet or computer.

Is there an Exam?

No. This is not a certification. It is simply a course. If you do need CECs (canfitpro or BCRPA), there is a quiz you can do in order to download a certificate of completion.

What if I have questions during the course?

You can book a 15-min virtual coffee with Nathalie to get clarity if you had a question during the course.

What score do I need to pass the Exam? (if I need CECs)

You need 80% to pass the quiz and receive your certificate.

If you want to live a vibrant life and really make a difference by working on transforming your thoughts with my 27 Tips, the next step for you may be to join the THINK Yourself® HEALTHY course.